Taxi aggregation apps are standard within the masses these days. The popularity rose just after Uber took the lead of making peer-to-peer ridesharing freely available among smartphone users.

The reason behind such success is because:

I am a persistent user of these apps. Lyft, Uber, Grab are the most common names when it comes to taxi apps.

"In Sri Lanka, when you think about taxi apps, it comes down to only two. Of course, Uber is one, and then we have the local competitor, a quite well-known brand, named PickMe."

One would say that an International brand would be more of use compared to the local one, and the other would support the locally catered one. Being a user of both, I would say that both have their pros and cons.

My comparison would be by the following: 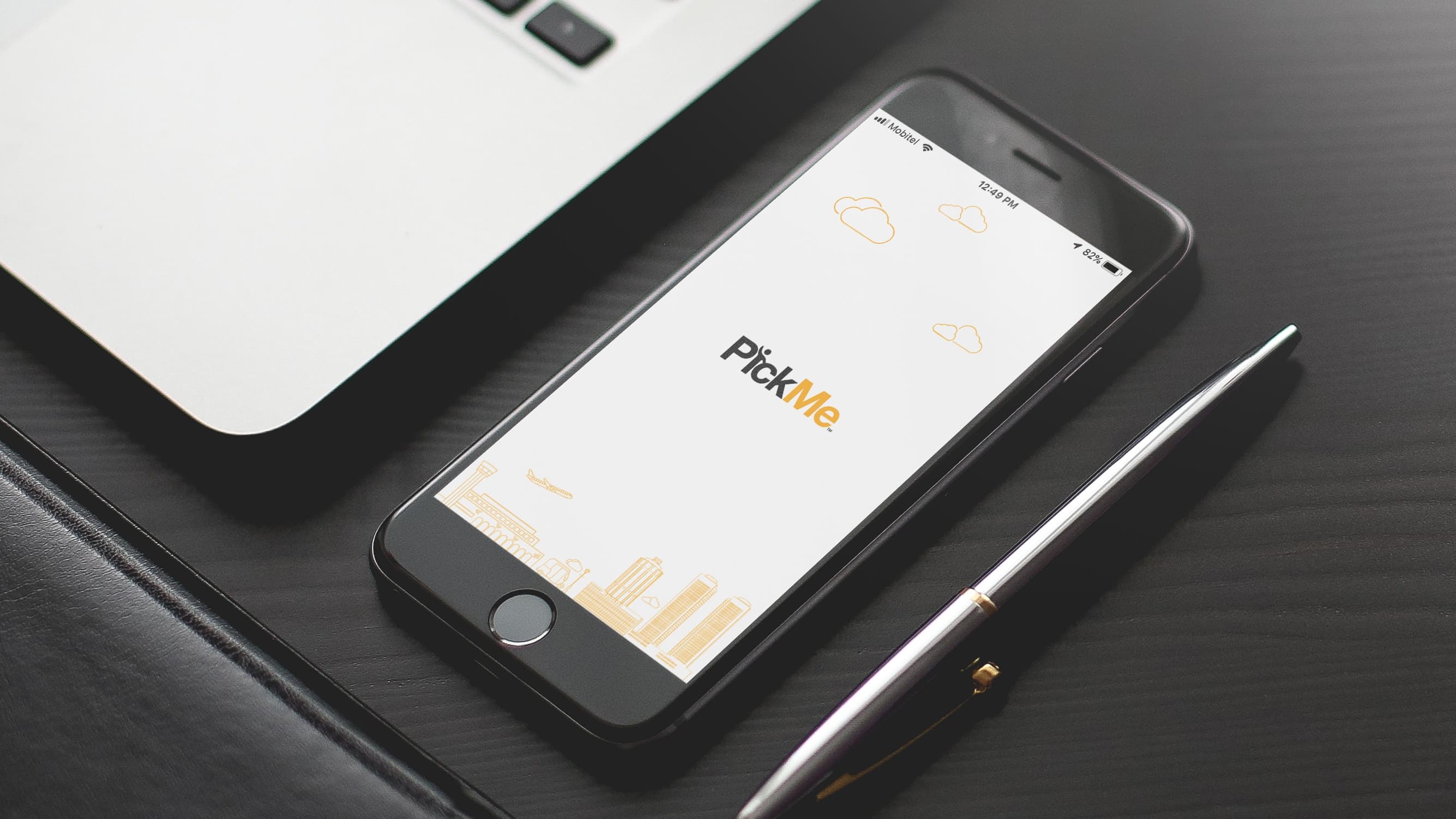 User experience plays a significant part in the whole success of these apps. Glad to say that both Uber and PickMe have a modern and up to date user interface.

Uber feels a bit more polished in general. Their design language shows a sense of fluidity when it comes to interacting throughout the process, including the motion and animations used. Uber uses Google Maps for retrieving data, meaning - it has all the locations you can generally search with on Google Maps.

PickMe is not bad either. Almost the same, however, there were a few places where found on Uber's search suggestion is not visible on PickMe’s. Something to do with the map engine used I assume? 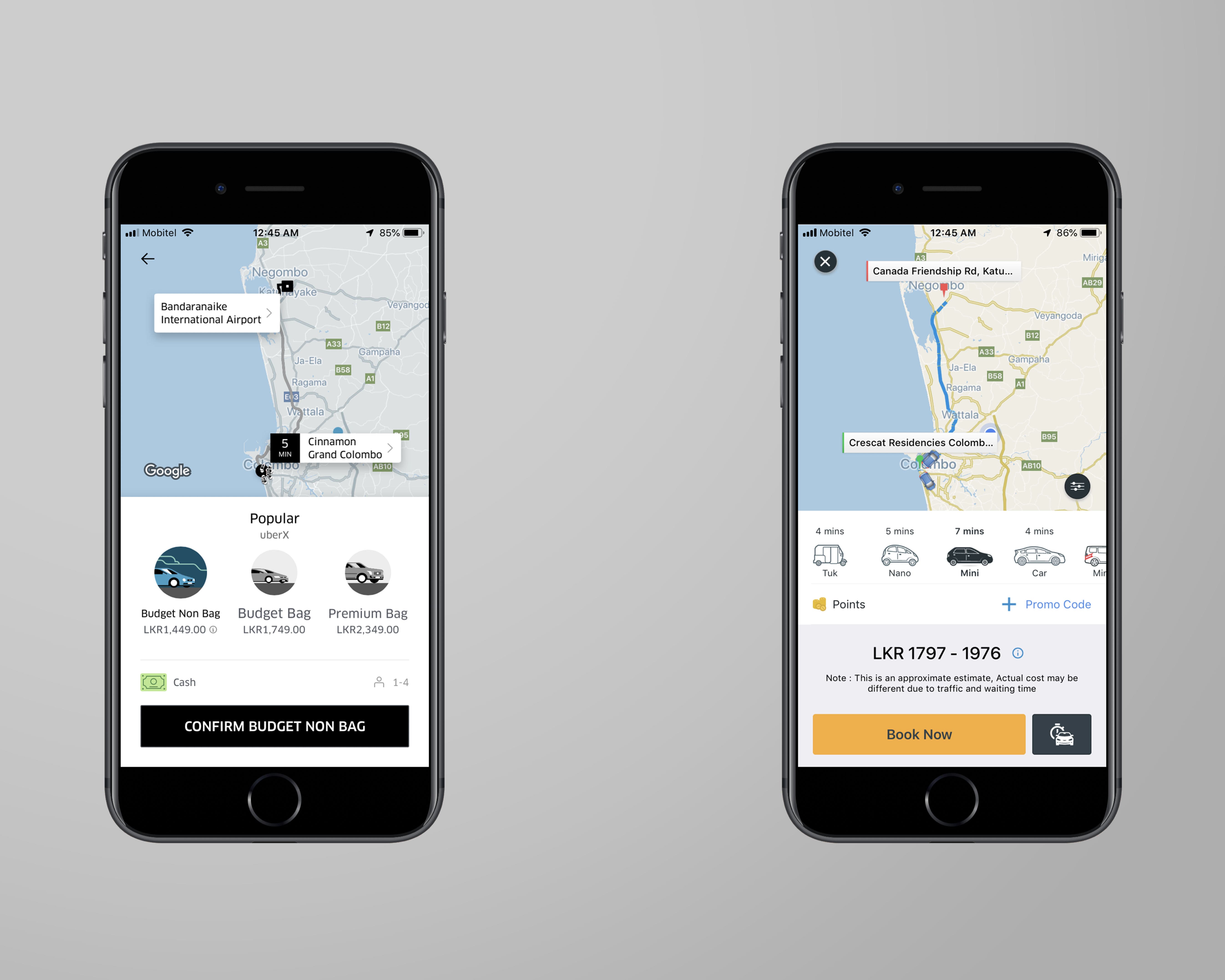 Both apps work towards their goal. What makes them different from one another? Let's take a peek.

There are a few differences, some notable features missing from each other. However, I see that PickMe's experience can be enhanced further if features of being able to add multiple stop-over locations, split the ride fare and an actual ETA to the final drop off location gets added in a future update.

It is worth noting that PickMe also offers Tour Packages to go around Sri Lanka, available here on their website. 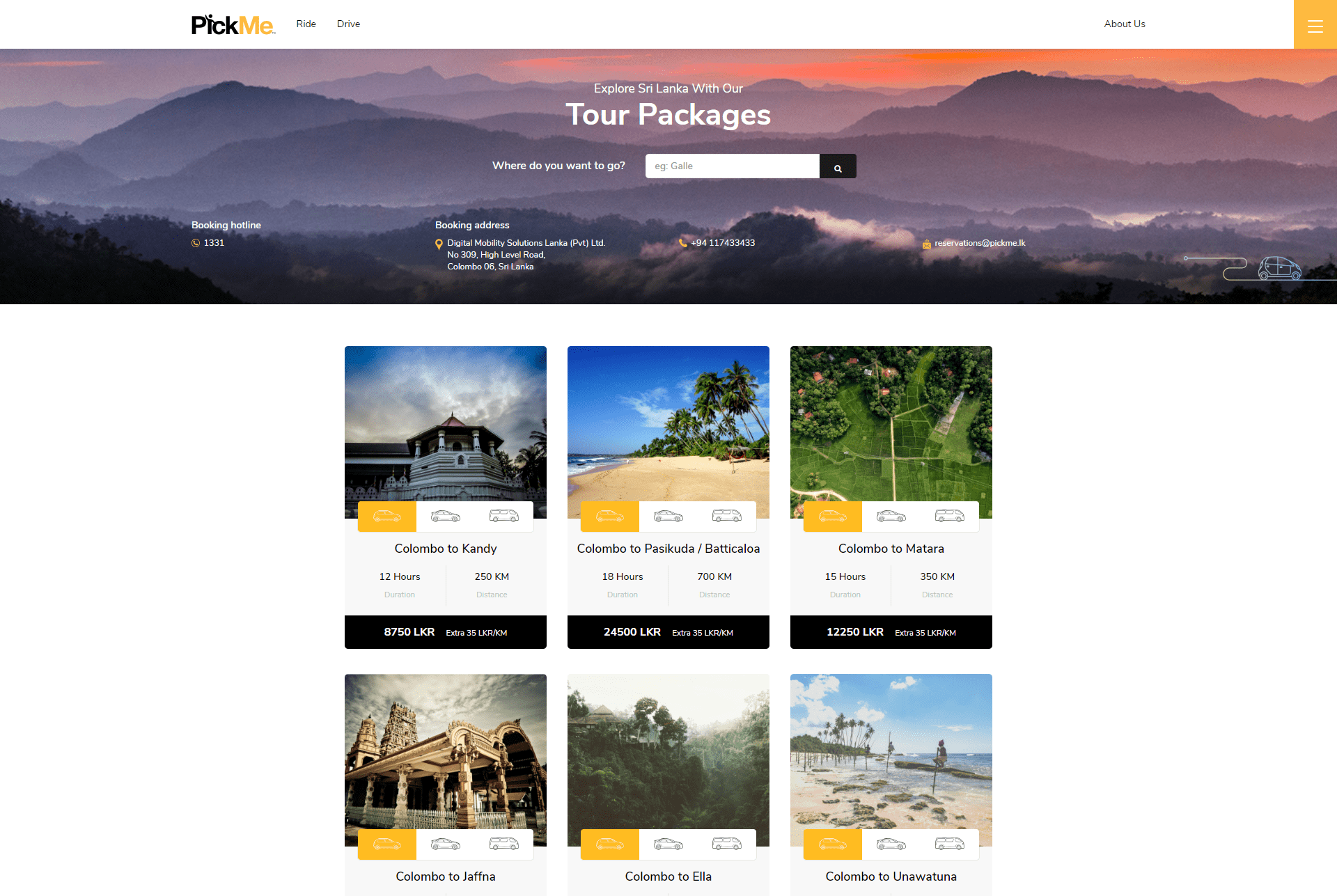 When you match with the same driver, are there any notifications?

Not exactly what you'd call a feature or requirement, but using these apps countless of times you sometimes end up with the same driver. Unless you're the type of person who wants to ride in silence, it would be a nice touch to know when this happens, something that both of these apps don't tell.

A little familiarization with the types of options PickMe and Uber offer in Sri Lanka.

Note: Rates of Uber HIRE GO, HIRE PREMIER and PickMe's Minivan, Van, and VIP options are not covered on my post. For more information, please have a look at their respective website. 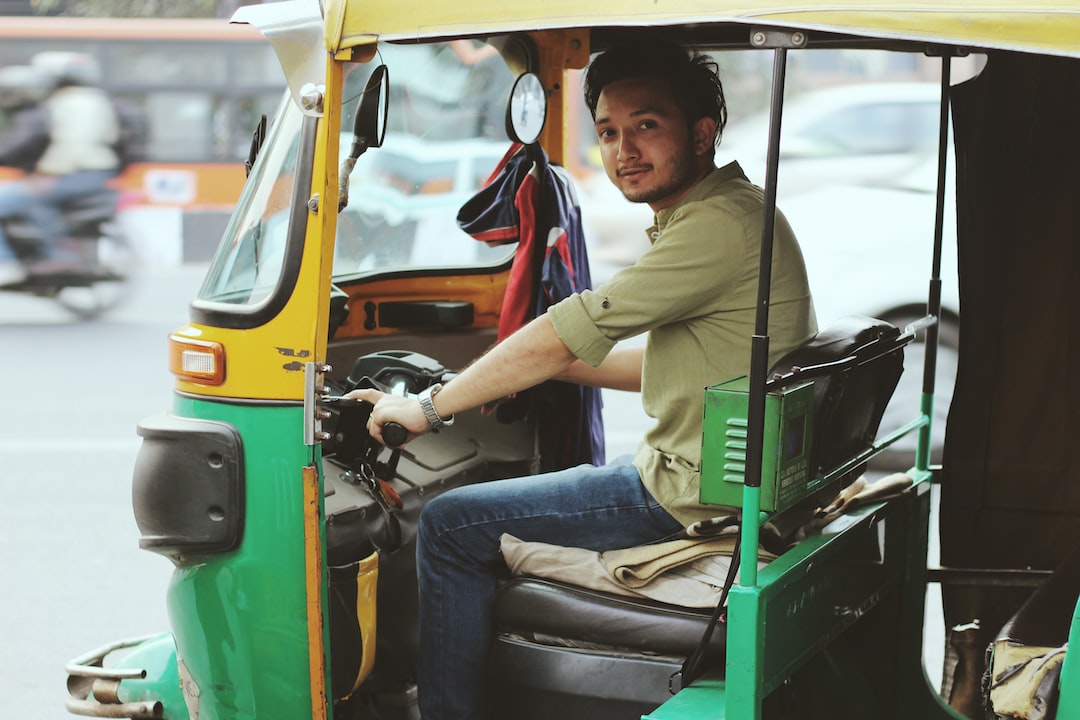 Fancy a tuk? Also called an auto rickshaw, it is easily the best option to pick to go around the city. Uber does not have a "Tuk" option.

Update as of August 22 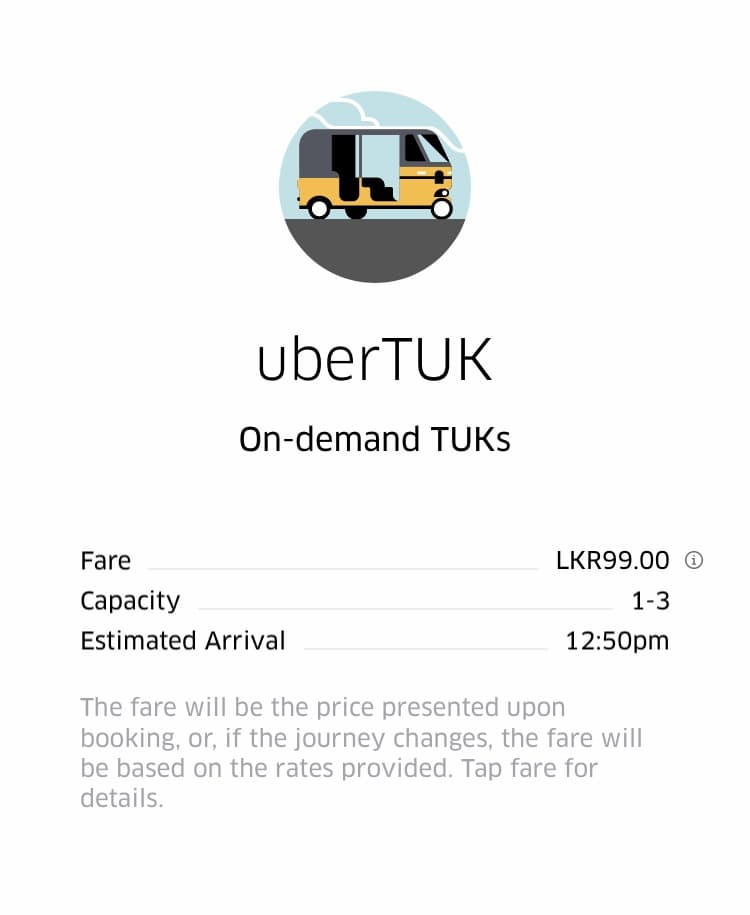 Both ZIP and PickMe Nano start as the entry-level category of inexpensive car rides. PickMe Nano is meant to have vehicle models like Tato Nano's, whereas ZIP, for the most part, are Suzuki Altos.

One benefit from using Uber is that if there are no vehicles available in the vicinity of your selected category, it automatically sends your request to the next available category, so you have a better chance of finding a comfier ride for the same price. 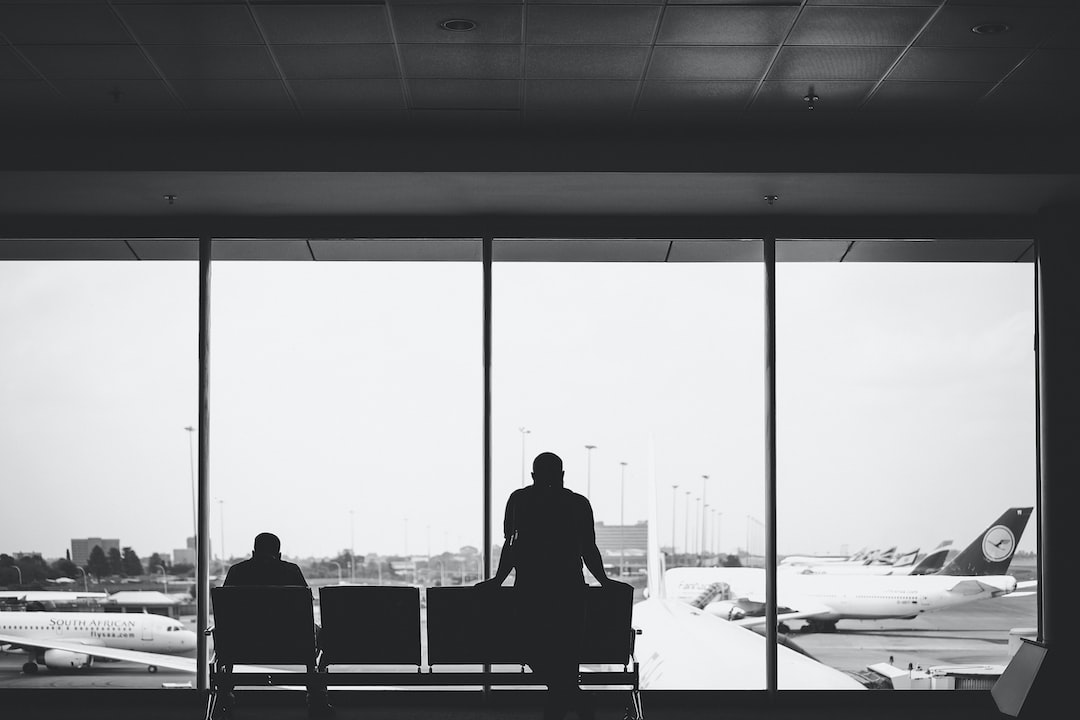 To get another view concerning pricing, let's compare how the rates are to go from Cinnamon Grand to the Bandaranaike International Airport, which is roughly 35.6 kilometers.

Note: The above rates are based on Uber's special packages. Depends on traffic conditions. Rates change from time to time.

For me, picking Uber or PickMe depends on traffic hours and time.

As you can see, the rates are not so different by a considerable margin between the two services. Uber usually is cheaper, but this fluctuates based on the traffic and timings. There's also something called Uber Surge on Uber, which bumps up the fare cost twice or thrice more than the usual during busy peak hours.

PickMe has a steadier rate. It does change when there's traffic however not up to the extent of Uber Surge. Peak hours or not, you're sure to get a fair rate with PickMe.

Excellent customer service automatically brings a better reputation to any organization. From response time to providing a solution, these things matter to customers.

But I do have a confession to make. If I were to decide between the customer service of Uber or PickMe, I'd straight away choose PickMe.

I found that Uber's customer service in Sri Lanka relies on outsourced customer service agents, at least that's what I think from my experience. Whenever I submit a support request, it is usually by an agent with canned responses. I have tried several times, and it's always the same answer, same or different agent - there's no proper solution provided. Response time sadly takes awhile as well.

It's one of the most significant drawbacks that Uber has, proven several times over.

PickMe on the other hand, you deal with actual people. You could even call their customer care hotline and speak to someone regarding your issue. Well, you don't also have to do that, simply reach them on their social media pages and you'd still be taken seriously.

Uber does have promotions from time to time. If you're interested in receiving discount rides, you can certainly do so by referring friends and family to sign up to Uber.

Any promising sign up will reward you with Uber credits for you to use on your next Uber trip.

Likewise, PickMe does promotions as well, more often than less. Referrals aren't something that's available on PickMe yet, but they do have a loyalty reward program.

For every LKR 100 spent on a ride, you get credited 1 Loyalty Point, roughly translates to LKR 1 where if you accumulate enough you can use it to pay for your next trip.

The chance of me picking one over the other is slim. I am glad that we have two reliable options to select. There are plenty of Uber and PickMe drivers around Colombo so that's double the opportunity, hence is why a mix-use of Uber and PickMe in my daily commute is what I am accustomed to.

Both apps are available on iOS and Android, I'll leave a link below for you.

I spend most days sipping coffee, having Spotify or a podcast session in background, just chilling away, this in addition to my addiction to movies and TV shows. I also like food.

Get to know whenever I post something new, spam free.